So where's all the updates?

Normally I post after weekly visits to the plot - which increases to three or four at this time of year. So why haven't I been posting updates? Illness?
Sadly no. It's a motivation problem. The reason being? Well this... 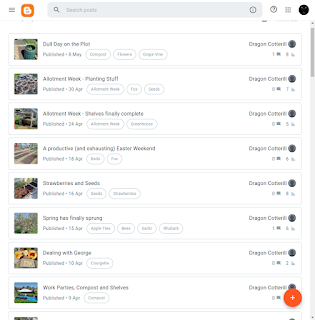 I started writing the blog to keep track of what I was doing on the plot. It was more of a personal record. But after a decade I'm pretty much doing the same thing each time. I know what I'm doing now (sort of) so now I'm pretty much uploading the same thing each week - pulling weeds, planting stuff, harvesting stuff. It seems that it just doesn't make for interesting content.

So, I'm not going to keep this blog as a "regular" blog, but now will switch it only to milestones or special interest. And at present there is nothing of interest going on.

Email ThisBlogThis!Share to TwitterShare to FacebookShare to Pinterest
Labels: Plot 30

Dull Day on the Plot

Dull? But the weather was so sunny? No, it's not a description of the weather, but the fact that the most exciting piece of work I did at the allotment was start a new compost pile. That's what passes for excitement here at present.

And here, in all it's exciting glory is... 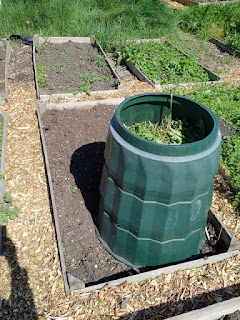 The compost bin. Yeah, I said it was a dull day. The bin itself is filled with weeds. These weeds have not yet set any seeds and are not invasive so they make a good start. And yes that is only about a foot from the top because I spent a good couple of hours digging the damn thing out. They're mostly a combination of fresh new thistles, lambs quarters and sticky willy. Along with a shed load of other stuff I couldn't even begin to identify. After all, a weed is just a plant that growing in the wrong location.

On the subject of growing, the Grape Vine has started putting forth it's leaves. 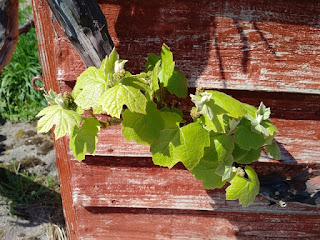 And one of the other vigorously growing plant is the phacelia. When I say vigorous, I mean it. It's virtually taken over The Wife's flower bed. Just as well really because the bees were swarming over it today. 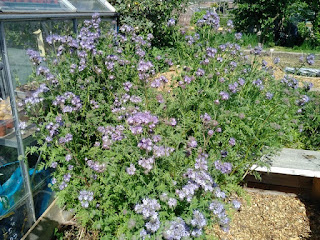 Some allotment week this has been. I put my back out earlier in the week and I didn't really get much chance to be down the plot. But today is nice and sunny, and my back is feeling much better so it's time to actually do something.

First off, there is a lot of stuff that was previously planted that needs potting on. So that's what I started with. The Pak Choi got put into individual pots. Previously I had put them into a long trough, but that kind of made it easy for a single snail to get in and ruin a lot of plants all at once. So this time, I'm putting them into separate pots (courtesy of M&S soups). 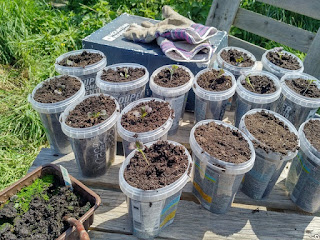 Meanwhile the Courgettes and Crown Princes all need to be sorted out. Not as good a successful germination rate this year, so I started a few more of them off. 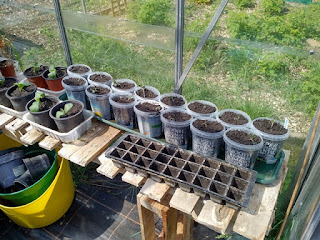 The empty trays in front were the sweetcorns that I started a while back. None of them took. At all. So I guess it's time to try some of the other kernels to see whether those are any better. 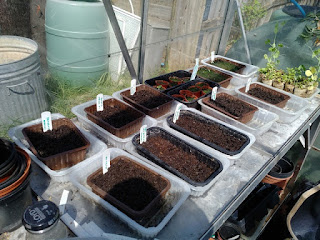 And we weren't alone at the plot. Our Vulpine Princess decided to visit to keep an eye on us and make sure we were working hard and to her exacting standards. 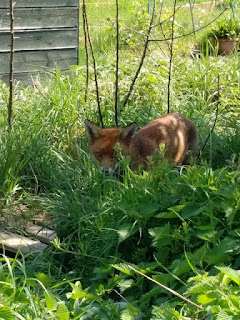 We've decided to call her Velma. After all, she wears orange.

It's allotment week. Again? Wasn't there one just a couple of weeks back? Well yes. It's because I'm now no longer able to carry over an obscene amount of leave from one year to the next. Covid has meant that I can't go anywhere else. The only places I can go is home and the allotment. I can't go to shops. And any face-to-face contact with other people must be outside and fully masked. As such I accrued a large amount of leave that was generously carried over. But now we're rolling it back so that only 5 days can be carried over. So once again, it's time to spend a week down the allotment.

Today was just a short visit. But I finally managed to get the shelves that I've been building, finished and mounted at the end of the greenhouse. 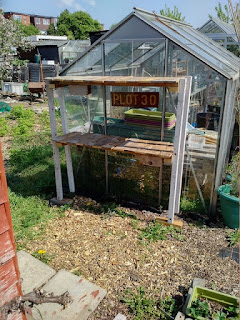 I suspect that these will end up as the storage points for the Tumbling Toms. I still have to fix the footings properly, but it's wired into the top of the greenhouse to stop it falling over. It's just damned hard trying to screw into hardwoods with just a screwdriver. I really need to get a decent set of tools. Which means I need to go shopping... which I can't do at present. Ho hum.

A productive (and exhausting) Easter Weekend

The plot is looking much better now. Yes there is still a lot to sort out, but it's getting there. Mind you, it's been "getting there" for nearly the past decade. Can you believe it's been nearly 10 years on the plot? 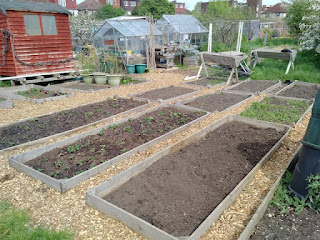 Digging out the couch grass is by far the worst job. But at least now the strawberry beds are all done (it'll keep The Wife happy) and most of the other beds are now very lightly weeded, so a simple forking over will deal with them. But it gives me a certain satisfaction to get things done.

All overseen by the Vulpine Princess of course... 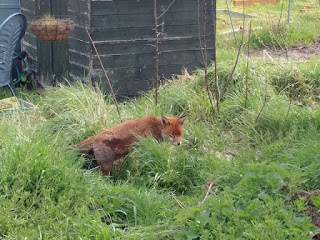